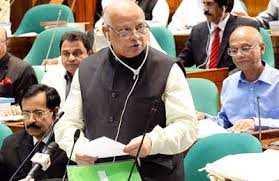 Finance minister Abul Maal Abdul Muhith has presented the Tk 4.645 trillion national budget for fiscal year 2018-19.
The 84-year English graduate has seen the budgetary outlay quadruple under his watch since 2009.
The current budget session also marks the octagenarian finance minister’s tenth consecutive budget session, a feat only he can boast of.
With the budget deficit still over a fourth of the huge outlay, which is expected to placate most quarters.
Muhith plans to finance almost 24 percent of the outlay from the poor in the form of value added taxes. As for tax on profits and income, the government will finance just about 21.67 percent of the outlay.
With a projected growth around 7.8 percent, the finance minister reported an estimated growth of 7.65 percent against a target of 7.4.
In what he terms as unstoppable journey towards progress of a decade, the finance minister has seen the economy grow at an average of 6.6 percent signinficantly up from 5.1 percent previously. Foreign reserves grew from $7.5 billion when Muhith took the helm of the finance ministry to $32.2 billion currently.
Experts believe the Finance Minister is likely to focus on development initiatives, employment generation and welfare in the budget as the national election will be held at the end of this year.
Talking to reporters on Monday, Muhith wished for higher revenue earnings, encouraged by the number of taxpayers having reached almost 3.3 million, with a large chunk of the newly registered ones being young people.
“I feel very good after 10 years,” Muhith said, adding that when he started people were unwilling to pay taxes due to harassment. “I don’t think it exists anymore in the country.”
The revenue collection target for the coming fiscal year is likely to be fixed at Tk 340,775 crore, up 18 percent from the Tk 287,990 crore set for the current, outgoing fiscal.
Finance Ministry officials said the revenue target will be fixed in such a way so that the budget deficit remains within 5 percent.
Muhith in his budget is expected to unveil an annual development programme (ADP) for the coming fiscal that is likely to be in the region of Tk 178,000 crore.
Earlier, Planning Minister AHM Mustafa Kamal forecast that the Bangladesh economy will attain GDP growth exceeding 8 percent in the next fiscal, up from the 7.7 percent this year.
There might be an announcement to bring more people under social safety net programme in the next budget.
There is an indication that there will be another announcement for freedom fighters on enhancing their facilities.
The minister will also highlight steps to strengthen the country’s capital market.