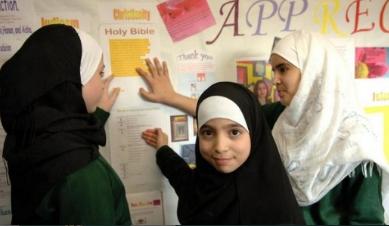 A new analysis of official data in UK 2011 census has found that the Muslim population of England and Wales is growing faster than the overall population, with a higher proportion of children and a lower ratio of elderly people.
“It nails some significant myths about Muslims,” Omar Khan, from the race equality think tank the Runnymede foundation, told BBC Asian Network.
“The numbers of Muslims, which is often exaggerated; how proud Muslims are to be British; how well they fit in; and the narrative around British values.
“They’re proud to call themselves British, don’t have allegiances to other countries in any major way, and they don’t have any confusion around where their identity lies.”
According to the analysis, published by the BBC, one in 12 schoolchildren were Muslim as the total number of Muslims in the UK rose from 1.55m in 2001 to 2.7m in 2011.
It suggests that the number of British Muslims has grown quickly since 2001, with a third aged 15-or-under at the time of the 2011 census.
There were 329,694 Muslim full-time students in 2011 – 43% female and 57% male.
The reports said 24% of Muslims over the age of 16 are qualified to degree level, compared to 27% the general population.
But, it suggests that 71% of Muslim women between the ages of 16 and 24 were not in employment, compared to approximately half the general population.
Half the Muslims in England and Wales were born there and almost three-quarters (73%) identify themselves as British. Two-thirds of Muslims are ethnically Asian and 8% are white.
Moreover, it revealed that 46% of British Muslims live in the some of the most deprived local authority districts in England, putting a question mark on having equal rights in their country.