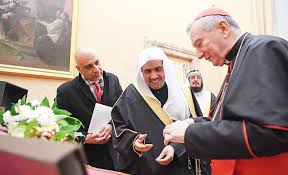 The Vatican Secretary of State Cardinal Pietro Parolin has met the secretary-general of the Muslim World League, Mohammed bin Abdul Karim Al-Issa, in his office on Tuesday.
Parolin praised the Muslim World League, which represents Islamic nations and has its headquarters in Makkah.
He also praised the efforts of the secretary-general for enhancing cooperation with the Vatican, especially after the historical meeting last September between the pope and the secretary-general, in which they both stressed their commitment to open dialogue between Islam and Christianity.
Dialogue was increasingly necessary because of the rise of extremists who committed violence in the name of religion, he said.
The secretary general of the MWL gave the opening speech at a conference on “Ways to solve the violence committed in the name of religion,” organized by the Vatican and the British government.
The Vatican secretary of state stressed the importance of positive relations between the league and the Vatican, and praised the commitment of both parties to fruitful and constructive dialogue.
Al-Issa stressed the importance of creating awareness in future generations through a positive reading of the lessons of the past.
Respecting difference was vital and he warned that a lack of dialogue and acceptance of others opened the door to extremism and fanaticism.
He said that the pope was committed to the idea that differences should not be a reason for separation and that 80 percent of the diplomatic efforts of the Vatican focused on dialogue and spreading peace.
Al-Issa expressed his regret that 70 percent of wars throughout history were religious. Confronting extremism and counter-extremism was one of the major responsibilities of religious leaders, he said.
He praised the Vatican for its statement that “Islam has nothing to do with terror.”