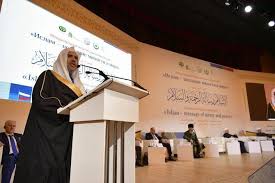 In a first in the history of Russia, the Muslim World League (MWL) launched an international conference in Moscow on religious peace and coexistence.
Participants from 43 countries, including senior muftis, scholars, intellectuals and politicians, took part in the three-day summit, which included a session in the Chechen capital Grozny.
Russia was chosen as the site of the summit because it has been a model of religious and ethnic harmony in recent years, according to the MWL.
Russian officials said that Islam is an integral part of the country’s culture.
The MWL conference promoted values of coexistence and peace, and emphasized the importance of “working in the common humanitarian and national circle.”
The summit’s six main sessions included “Russian Muslims and the Community of Peace,” “Terrorism and Extremism,” and a panel discussion on the role of social and religious organizations in spreading moderation.
Saudi Arabia’s efforts to combat terrorism, and attempts by terrorist organizations to target youth through social media were also discussed.
The fifth session, held in Grozny, discussed the foundations of religious and ethnic relations in Russia and the country’s relationship with the Islamic world.