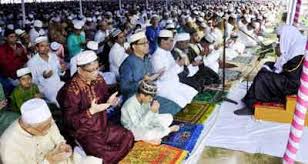 Muslims across the country are celebrating the holy Eid-ul-Fitr, the largest Muslim religious festival.
Eid-ul-Fitr marks the culmination of the holy Ramadan, the ninth month of the Islamic calendar, during which Muslims across the world observe 29 or 30 days of fasting subject to Shawal moon sighting.
The eid celebrations begin with the offering of late morning prayers in mosques, eidgahs and open spaces wearing new dresses after having early morning showers.
The National Moon Sighting Committee took the decision to celebrate the eid at a meeting at the Islamic Foundation’s Baitul Mukarram office on Friday after reviewing the information of Shawal moon sighting.
The eid moon was sighted in the country’s northern district of Joypurhat on Friday evening, meeting sources said.
Millions of city dwellers left the capital and other major cities to celebrate the eid with their near and dear ones in their village homes.
There was huge exodus from capital Dhaka as people in their thousands left the city on Friday.
All necessary preparations have been completed across the country, including capital Dhaka and Sholakia in Kishoreganj, for the smooth holding of eid congregations.
The largest eid congregation will be held at Sholakia Eidgah in Kishoreganj district at 10am when lakhs of Muslims will offer prayers seeking divine blessings, peace and progress for the country.
In the capital, the main eid congregation will be held at the National Eidgah near the High Court at 8:30am. President Abdul Hamid will join the eid jamaat.
However, the main jamaat venue will be shifted to the Baitul Mukarram National Mosque in case of any inclement weather.
Five congregations will be held at 7am, 8am, 9am, 10am and 11am at the National Mosque.
Arrangements are there at the National Eidgah and the National Mosque for women to take part in the eid prayers alongside their male counterparts.
Eid congregations will also be held in eidgahs, mosques and open spaces across the country.
As the eid this time falls during monsoon, the Met Office said light to moderate rain is likely to occur at many places over Dhaka, Khulna, Barisal, Chittagong and Sylhet divisions and at a few places over Rangpur, and Rajshahi divisions on the eid day.
The eid day would dawn with special eid sermons where Ulema would stress the unity of the Muslim Ummah, and prayers will be held for the country’s prosperity and the wellbeing of its people.
Tight security measures have been taken to ensure smooth holding of eid congregations throughout the country.
The national flag will be hoisted atop government and non-government office buildings on the day. The main city streets and road islands will be decorated with the national flag and banners inscribed with ‘Eid Mubarak’ in both Bangla and Arabic.
Special diet will be served in hospitals, jails, government children homes, university halls, Chotomoni Nibash, centres for persons with disabilities, shelter homes, orphanages, vagrant welfare and destitute welfare centres.
President Abdul Hamid, Prime Minister Sheikh Hasina and BNP chairperson Khaleda Zia have issued separate messages greeting people on the occasion.
President Abdul Hamid will host a reception at Bangabhaban at 10am on the occasion of Eid-ul-Fitr.
Prime Minister Sheikh Hasina will exchange eid greetings with people from all walks of life on the eid day at her official residence, Gonobhaban, from 9:30 am to 11:00am.
BNP chairperson Khaleda Zia will exchange greetings with eminent citizens and diplomats at Bangabandhu International Conference Centre (BICC) on the eid day in the city from 11:30am to 1:15pm.
The government has taken elaborate programmes to facilitate the eid celebrations across the country with due solemnity and religious fervour.
A three-day government holiday already began Friday on the occasion. Newspapers will remain closed from July 17 to 19.
Bangladesh Betar, Bangladesh Television and private television channels will air special programmes on the occasion.
Bangladesh missions abroad will also celebrate the Eid-ul-Fitr in a befitting manner.
Meanwhile, the people of 40 villages in Chandpur and 30 villages in Chittagong and nine villages in Dinajpur, and some other parts of the country celebrated the eid on Friday in line with Saudi Arabia.