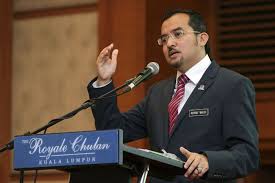 The deputy minister in charge of Islamic affairs said the public perceives Islam as only related to worship, while the issue of halal and haram — what is permissible and forbidden in Islam — is seen as only related to consumption.

Asyraf said in his keynote address at a seminar on Islamic financial institutions and charity here as reported by Malay Mail Online.

The senator said when it comes to consuming meat, the public are very concerned about ensuring that the slaughter is Shariah compliant, but not as much as the money involved in the purchase.

The deputy minister in the Prime Minister’s Department said: Muslims should understand that there are severe consequences to consuming haraam wealth, even if that is only that one’s du’aa’s are not answered, as it says in Saheeh Muslim 1015, that the Prophet (peace and blessings of Allah be upon him) said: “Allah is Good and only accepts that which is good…” and he mentioned a man who has been traveling for a long time and is unkempt and covered with dust, and he raises his hands to the heavens (and says), “O Lord, O Lord,” when his food is haraam, his drink is haraam, his clothes are haraam, and he is nourished with haraam, so how can he receive any response?

On Monday, minister Datuk Seri Jamil Khir Baharom had said that the authorities will not issue halal certification for non-alcoholic “beer” or any product that uses “haram”-related names like ham or bacon.

The various kinds of ‘pretzel dogs’ sold at Auntie Anne’s. The local chapter of the US pretzel chain has confirmed that it has changed the name of its ‘pretzel dog’ to ‘pretzel sausage’.

Under the Trade Descriptions (Certification and Marking of Halal) Order 2011, only the federal Islamic Development Department — better known by its Malay abbreviation, Jakim — and state Islamic departments and councils can issue halal certification.

The report also said that fast food chain A&W switched to calling its signature root beer drink, “RB”, in 2013, in order to get the halal certification for all its outlets.

Some fast food restaurants in Malaysia use non-pork alternatives for ham and bacon, such as turkey ham and beef bacon.