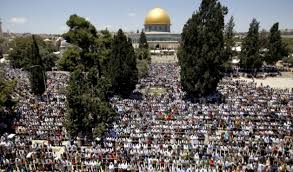 People, who hit the streets this day in different parts of the Muslim world, do so to demonstrate their support to Palestine and call for putting an end to Jerusalem occupation.

The biggest celebration is usually held in Iran’s capital Tehran. Tens of thousands of Iranians are currently taking part in an annual pro-Palestinian rally marched in Tehran.

The rallies on Friday have come as Iran and six world powers have held talks in Vienna aimed at working out a deal for the nuclear negotiations in exchange for easing tens of billions of dollars in economic penalties on the Islamic Republic.

A report in Haaretz says that protesters in Tehran have burned Israeli and American flags. Other media reports said similar rallies were held in other cities of Iran as well.

Meanwhile, an estimated 20,000 protesters expected to take to the streets of Cape Town in South Africa at the International Al-Quds Day march on Friday to show their support for the people of Palestine. Moreover, massive demonstrations are held in Iraq’s Baghdad and Lebanon. Malaysian Consultative Council of Islamic Organisation (Mapim), in turn, hopes 50,000 Muslims are going attend the peaceful rally to commemorate the Al-Quds Day in Kuala Lumpur.

Iran does not recognize Israel and since the 1979 Islamic Revolution has observed the last Friday of the Islamic holy month of Ramadan as “Al-Quds Day.” This occasion is meant to express support for Palestinians and emphasize the importance of Jerusalem by Muslims around the globe.