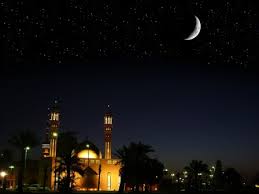 Ghazanfar Ali Khan: Millions of Muslims worldwide will mark the start of Ramadan, a month of intense prayer, dawn-to-dusk fasting and nightly feasts, most probably from Saturday.
Fasting during Ramadan is one of the five pillars of Islam, along with the Muslim declaration of faith, daily prayers, charity and performing the Haj pilgrimage.
In Saudi Arabia the holy month has its own significance, during which many pilgrims from around the world travel to the holy cities of Makkah and Madinah for Umrah.
Expatriates of different nationalities, whose number exceeds 10 million in the Kingdom, celebrate Ramadan in their own traditions and styles.
“It is interesting to see the charity work done by Saudis during Ramadan,” said Nabil Al-Bakr, a worker at the local Islamic Propagation Center in Riyadh. The center and other charities distributed about 1 million iftar packs during Ramadan last year, he added.
Muslims who fast during Ramadan abstain from eating and drinking from dawn to dusk for the entire month. A single sip of water or a puff of a cigarette is enough to invalidate the fast.
Ramadan is an exercise in self-restraint, self-control and self-discipline. Muslims are encouraged to avoid gossip, arguments and fighting.
Just before the fast, Muslims have a pre-dawn meal called suhoor to get them through the day.
Families and friends often come together for iftar, breaking the fast at dusk, typically with dates.
The ninth month of the Islamic calendar, right after the month of Shaban, marks the start of Ramadan, the time when the doors of hell are firmly sealed and the doors to heaven are wide open, as mentioned in the Qur’an.
It is a time of intense prayer and profound devotion to God. The Qur’an was first revealed to the Prophet Muhammad during Ramadan, according to the holy book. Those who are ill, traveling, elderly, pregnant, breastfeeding, diabetic or menstruating are exempt from Ramadan obligations.
During the month, office and school hours are reduced in Saudi Arabia. Most shopping malls, restaurants and markets are open until 3 or 4 a.m. It is said that days literally turn into nights during this time.
Encouraged by the Qur’an, people become more merciful, helpful and kind to each other, partaking in practices such making donations and helping and feeding the less fortunate.
Across the Muslim world, mosques and charities set up tents and tables for the public, and distribute food during iftar.
At the end of Ramadan, family and friends celebrate with parties.
It is said that even the poor become rich during this month due to the kindness shown by the more fortunate.