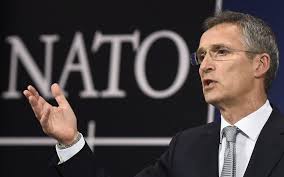 NATO has expelled seven diplomats from Russia’s mission to the alliance and blocked the appointment of three others over the nerve agent attack in Britain this month, NATO Secretary-General Jens Stoltenberg said on Tuesday.
Stoltenberg said he had also cut the maximum size of the Russian mission to 20 people from 30, in the latest move by the alliance to reduce what was once one of the biggest national delegations at NATO.
“It sends a very clear message to Russia that it has costs,” Stoltenberg said of the March 4 attack on a former Russian double agent and his daughter, which the West blames on Moscow although the Kremlin denies this.
Governments across Europe, the United States and beyond announced plans on Monday to expel more than 100 Russian diplomats in retaliation for the attack.
Stoltenberg said that three Russian diplomats seeking to come to Brussels have been denied accreditation, taking the reduction at the mission to 10,
However, Stoltenberg, a former Norwegian prime minister, stressed that the alliance would still seek regular talks with Moscow via the NATO-Russia Council, a special forum that groups NATO envoys and Moscow’s ambassador to the alliance.
The Russian mission is in the same compound as NATO headquarters in Brussels but Russian diplomats faced sharp limits to their access after Moscow seized Crimea from Ukraine in 2014. They mostly work now from Russian diplomatic premises in central Brussels.
In protest at the Crimean annexation, NATO decided to curtail access to the headquarters for all Russian accredited NATO diplomats barring the Russian ambassador, the deputy head of mission and two support staff.
NATO is awaiting a new Russian ambassador following the departure of Alexander Grushko, who was appointed deputy Russian foreign minister for European relations in January.
Following the end of the Cold War, NATO sought closer ties with Russia and included Russian personnel in its campaign in the Balkans in the 1990s.
But since Crimea, NATO has suspended all practical military and civilian cooperation with Russia, although it maintains political dialogue and has tried to restart military channels of communication, mainly to discuss the crisis in Ukraine. -Reuters