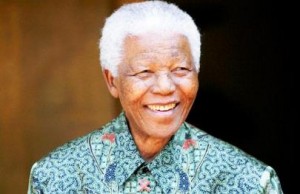 Former South African President Nelson Mandela died peacefully at his Johannesburg home on Thursday after a prolonged lung infection, President Jacob Zuma said.
Mandela, the country’s first black president and anti-apartheid icon, emerged from 27 years in apartheid prisons to help guide South Africa through bloodshed and turmoil to democracy.
“Fellow South Africans, our beloved Nelson Rohlihlahla Mandela, the founding president of our democratic nation, has departed,” Zuma said in a nationally televised address.
“Our people have lost a father. Although we knew this day was going to come, nothing can diminish our sense of a profound and enduring loss. His tireless struggle for freedom earned him the respect of the world. His humility, passion and humanity, earned him their love,” he added.
Mandela would receive a full state funeral, Zuma said, ordering flags to be flown at half mast.
Mandela rose from rural obscurity to challenge the might of white minority apartheid government – a struggle that gave the 20th century one of its most respected and loved figures.
He was among the first to advocate armed resistance to apartheid in 1960, but was quick to preach reconciliation and forgiveness when the country’s white minority began easing its grip on power 30 years later.
Mandela was elected president in landmark all-race elections in 1994 and retired in 1999.
He was awarded the Nobel Peace Prize in 1993, an honor he shared with F.W. de Klerk, the white Afrikaner leader who released from jail arguably the world’s most famous political prisoner.
As president, Mandela faced the monumental task of forging a new nation from the deep racial injustices left over from the apartheid era, making reconciliation the theme of his time in office.
The hallmark of Mandela’s mission was the Truth and Reconciliation Commission which probed apartheid crimes on both sides of the struggle and tried to heal the country’s wounds. It also provided a model for other countries torn by civil strife.
In 1999, Mandela handed over power to younger leaders better equipped to manage a modern economy – a rare voluntary departure from power cited as an example to African leaders.
In retirement, he shifted his energies to battling South Africa’s AIDS crisis and the struggle became personal when he lost his only surviving son to the disease in 2005.
Mandela’s last major appearance on the global stage came in 2010 when he attended the championship match of the soccer World Cup, where he received a thunderous ovation from the 90,000 at the stadium in Soweto, the neighborhood in which he cut his teeth as a resistance leader.
Charged with capital offences in the infamous 1963 Rivonia Trial, his statement from the dock was his political testimony.
“During my lifetime I have dedicated myself to this struggle of the African people. I have fought against white domination, and I have fought against black domination.