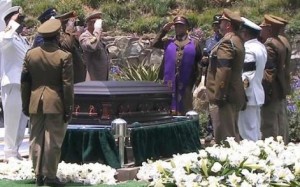 South Africa buried Nelson Mandela on Sunday, closing one chapter in its tortured history and opening another in which the multi-racial democracy he founded will have to discover if it can thrive without its central pillar.
The Nobel peace laureate, who was held in apartheid prisons for 27 years before emerging to preach forgiveness and reconciliation, was laid to rest at his ancestral home in Qunu, after a send-off mixing military pomp and the traditional rites of his Xhosa abaThembu clan.
As his coffin was lowered into the wreath-ringed grave, three military helicopters flew low over the cemetery dangling the South African flag on weighted cables, a poignant echo of Mandela’s inauguration as South Africa’s first black president nearly two decades ago.
A battery of cannons fired a 21-gun salute, sending booms reverberating around the rolling hills of the Eastern Cape, before five fighter jets flying low and in formation roared over the valley.
“Yours was truly a long walk to freedom, and now you have achieved the ultimate freedom in the bosom of your maker,” a presiding military chaplain told mourners at the family gravesite, where three of his children are already buried.
At the graveside were 450 relatives, political leaders and foreign guests including Britain’s Prince Charles, American civil rights activist Reverend Jesse Jackson and talk show host Oprah Winfrey.