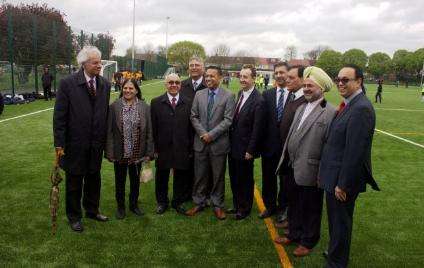 Over 60 lucky local young footballers were the first to play on the brand new 3G football pitch at the London Tigers Sports Complex in Spikes Bridge Park during the opening ceremony on Monday 7th April.
The artificial 11-a-side turf pitch was opened by Cllr Julian Bell, Council Leader for Ealing, Deputy Mayor Cllr Tej Ram Bagha, Cllr Virendra Sharma MP, Janpal Basra of Southall Community Alliance and Mesba Ahmed of London Tigers. Funders, partners and supporters also attended the event.
The opening of the pitch marks an exciting new era in Spikes Bridge Park. London Tigers have fantastic new projects planned for the local community and the facilities including cricket nets, the 3G pitch and community hall will be available for hire soon.
The artificial turf pitch forms the final part of a £2.2million makeover of the sports ground, which also features new cricket training nets and a new pavilion housing changing rooms, toilets and community space. The grass football fields and cricket pitch have also been upgraded, with new lines marked out and drainage improved. 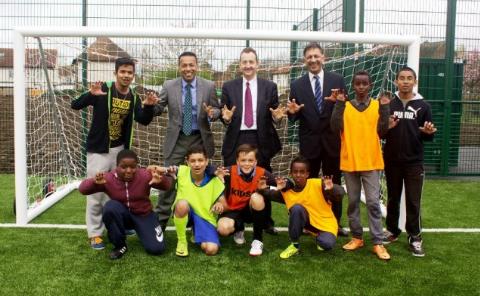 Local sports charity and football club, London Tigers, has taken up a lease of the new pavilion and sporting fields. The club will begin running its football fixtures from May this year, which will cater for all levels from under 5s right through to adult teams. Southall Community Alliance will also use the new pavilion to provide courses, information evenings and social events.
Councillor Julian Bell, leader of Ealing Council, said: “I am delighted that Spikes Bridge Park now offers local people first-class football and cricket facilities, as well as access to rooms for hire in the new pavilion. Sporting legacy is alive and well in the borough and I hope this new artificial turf pitch will inspire a new generation of local people to start playing.”
Mesba Ahmed, CEO of London Tigers, said, “We are delighted that the next phase of Spikes Bridge Park development is completed. The new 3G artificial pitch will enable us to deliver our football development plan to provide wide range of opportunities, including creating a London Tigers Southall Football Club linked to our semi-professional team playing in the The FA Cup and The FA Vase. We will also organise youth and adult football leagues, academies for both football and cricket and many other sporting programmes to engage and integrate the multi-cultural Southall Community through sports.”
The redevelopment was made possible thanks to grants from a number of sporting organisations. Together with the council’s contribution, Spikes Bridge Park received funding from the Mayor of London, Football Foundation, England and Wales Cricket Board and London Marathon Charitable Trust.