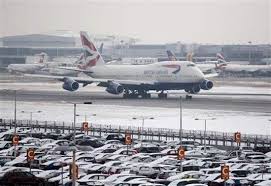 A fresh bout of snow on Saturday forced the cancelation of more than 100 flights in and out of London’s Heathrow Airport, with a bad forecast threatening further disruption.
Transatlantic flights were among more than 115 grounded so far, with British Airways canceling multiple domestic flights to Edinburgh, Glasgow and Manchester and services to European destinations.
“While this weekend’s weather may result in minor delays and some airlines consolidating flights, significant disruption at Heathrow is not currently expected,” said a Heathrow spokesman.
“We are working closely with our on-site Met Office to monitor the further snowfall expected throughout the weekend.”
The airport canceled scores of flights at the end of last month following the arrival of the “Beast from the East” snowstorm.
The new icy blast bas been dubbed the “mini-Beast from the East,” with disruption expected to be less widespread and sustained.