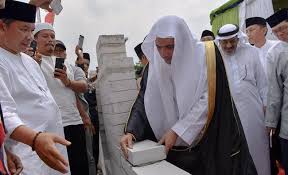 Indonesian society is an example of tolerance and multicultural harmony, the general secretary of the Muslim World League (MWL) said in Jakarta on Thursday as he laid the foundation stone for the new Center for International Civilization.
Dr. Muhammad bin Abdul Karim Al-Issa said the League tried to enhance the high values of Islam and encouraged a moderate approach among Muslims to defeat extremism, which had actually emerged because of the weakness of the moderate approach. He said a true understanding of Islam came through a holistic view.
Prof. Jimly Asshiddiqie, one of the founding justices of the Constitutional Court in Indonesia, said he was confident that under the leadership of Al-Issa, the Muslim World League would develop and progress.
The new center will be built on land donated by Al Azhar University in Indonesia. It will consist of a 1,000-square-meter conference and seminar area named in honor of Al-Issa, and a 2,000 sq. m. mosque with capacity for 6,000 people.