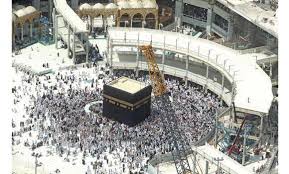 A new security plan is being put in place for the safety and security of pilgrims and worshippers with the expansion of the mataaf (the circumambulation area around the Kaaba) at the Grand Mosque in Makkah.
“The mataaf will have a larger capacity to accommodate pilgrims during the Haj and Umrah seasons. The police, the traffic department and the crowd management and control departments of the Ministry of Haj should set a comprehensive plan to ensure the safety and security of pilgrims and worshippers,” said Director of General Security Lt. Gen. Othman Al-Muhrij, who met with the Development of Makkah Commission to be updated about the expansion project.
“The expansion project is progressing in a steady pace. We need to be ready for the huge influx of pilgrims in Ramadan. The General Security Directorate must coordinate with the commission and other authorities to come up with a comprehensive security plan,” said Al-Muhrij.
General Security Haj and Umrah Assistant Director Lt. Saud Al-Khlaiwi said he gave a visual presentation of the important points the directorate needs to be fully aware of now that the mataaf capacity has increased.
“We need to take into consideration all of the new developments, including the new Haramain Train and how it will affect the safety and security of the pilgrims. We need to account for the traffic the train will cause during Haj and Ramadan,” said Al-Khlaiwi.
Development of Makkah Commission spokesman Jalal Kaki said the commission held a meeting on Monday with various security and administrative authorities and directorates.
“The safety and security of pilgrims and worshippers are paramount to us. All pertinent directorates and authorities must be fully informed of the new developments projects,” said Kaki.