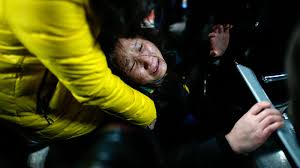 Thirty-five people have been killed in a stampede during New Year celebrations in downtown Shanghai, China’s state-run Xinhua News Agency reported.
The report early on Thursday cites the Shanghai government in saying that another 42 people were injured amid the chaos about a half-hour before midnight.
The deaths and injuries occurred at Shanghai’s popular riverfront Bund area, which can be jammed with spectators for major events.
One Xinhua photo from the scene showed at least one person doing chest compressions on a shirtless man while several other people lay on the ground nearby, amid debris. Another photo showed the area ringed by police.
The cause of the stampede remained under investigation, the Xinhua report said.
Last week, the English-language Shanghai Daily reported that the annual New Year’s Eve countdown on the Bund that normally attracts about 300,000 people had been cancelled, apparently because of crowd control issues. The report said a “toned-down” version of the event would be held instead but that it would not be open to the public.
The stampede appeared to be near that area.
Shanghai’s historic Bund riverfront runs along an area of narrow streets amid restored old buildings, shops and tourist attractions. The China Daily newspaper in February reported that the city’s population was more than 24 million at the end of 2013.