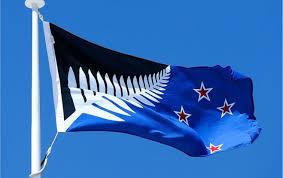 The British Union Jack once symbolized the reach of a powerful empire — but it may need to yield soon to a delicate silver fern. At least on New Zealand’s flag.
New Zealand on Tuesday revealed the new flag design chosen by the public to be put up as a challenger to the current flag in a March vote.
The question of whether to change a national symbol that has endured for more than a century and harks back to a colonial past has raised plenty of passion, and skepticism, in this nation of 4.6 million.
People submitted more than 10,000 potential new flag designs, including bizarre ones like a kiwi bird shooting a green laser beam from its eye and a stick drawing of a deranged cat.
In the end, it came down to two flags by architectural designer Kyle Lockwood that featured the same design of a silver fern and four red stars, but with different background colors.
Results announced on Tuesday showed that Lockwood’s black and blue flag just edged his red and darker blue flag 50.6 percent to 49.4 percent in a runoff postal vote. Even the designer himself found it a tough choice.
“I agonized over the two on my voting form,” Lockwood said. “For a couple of weeks, I’d walk past it and think, ‘Which one?’ I like them both equally.”
Lockwood, who was born in New Zealand’s capital, Wellington, and now lives in Australia, said he didn’t want to say which one he gave his top vote.
His winning design has similarities to the current flag but ditches the Union Jack, or Union Flag, in favor of the fern, which has become a national symbol and is worn by many of New Zealand’s sports teams, including the beloved All Blacks rugby team.
Those who want to change the current flag say it’s too similar to Australia’s and references a colonial past that it’s time to leave behind. But opinion polls taken before the result was announced on Tuesday indicated a majority favored keeping the existing flag. Many don’t see the need for change or view the process as an expensive stunt by Prime Minister John Key, who opponents say is trying to forge a legacy or distract from other issues.
The Returned and Services Association, which represents New Zealand’s war veterans, is opposed to change, saying soldiers pledged allegiance to the current flag.
“Where were the people marching down the street saying ‘Change the flag’?” said BJ Clark, the RSA’s national president. “If a majority had wanted it, then maybe we could understand it.”
Those favoring Lockwood’s design hope that opinions will change before March as the debate focuses in on the two flags.
Clark said people should vote with their heart and accept the result. “The wonderful thing is that those people who served, fought for the country to be able to have their opinion,” he said.