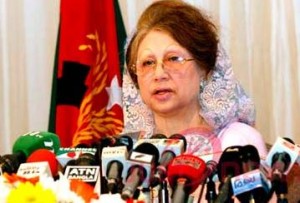 BNP Chairperson Khaleda Zia alleged that the government has destroyed the democracy of the country.
BNP Chairperson Khaleda Zia made the remark at a press conference at the hall room of Hotel Westin at Gulshan Tuesday afternoon.
“The government has imposed a one-person rule upon the people. In the name of the Constitution, Awami League has formed a one-party government.
At the beginning, she paid homage to the martyrs of the Language Movement and felicitated the Hindu community on the occasion of Saraswati Puja.
The press conference was organized to shed light on the country’s current political situation and ‘growing incidents of extrajudicial killing and human rights violation’ and her party’s next course of action.