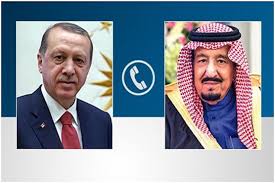 Saudi Arabia’s King Salman held a telephone call with Turkish President Recep Tayyip Erdoğan, in which he thanked the president for welcoming the Kingdom’s proposal to form a joint working group to discuss the disappearance of Saudi citizen Jamal Khashoggi.

King Salman stressed the Kingdom’s keenness to protect its relations with Ankara and asserted that no one will affect the strength of this relationship, reported the official Saudi Press Agency.
President Erdoğan also expressed his appreciation for the distinguished relations between the two countries and their peoples and his keenness to strengthen and develop them.