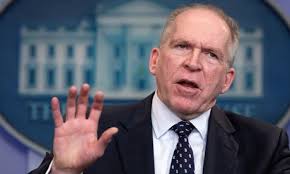 CIA director John Brennan told Al Arabiya News Channel’s Washington Bureau Chief Nadia Bilbassy-Charters in an exclusive interview on Saturday that “there was no evidence” of a Saudi involvement in the 9/11 attacks.
His remarks came after a 28-page congressional investigatory report claimed that there were proofs Saudi officials had supported al-Qaeda in the run-up to the attacks.
In May, John Lehman, a member of the Sept. 11 commission, told CNN that the classified contained evidence that as many as six Saudi officials supported Al-Qaeda.
But Brennan, in his first interview with an Arab media outlet, dismissed the claim.
“The Sep. 11 commission looked very thoroughly at these allegations of Saudi involvement, Saudi government involvement and their findings, their conclusion was that there was no evidence to indicate that the Saudi government as an institution or Saudi senior officials individually had supported the Sep. 11 attacks,” he said.
The director said “it is good” that this 28-page report will “come out.”
“The assessments that have been done show it was very unfortunate that these attacks took place but this was the work of al-Qaeda, [al-Qaeda’s leader Ayman] al-Zawahri, and others of that ilk,” he added.
He also said “over the last 15 years, the Saudis have become among our best counterterrorism partners.”
Brennan described both Saudi King Salman and his deputy Crown Prince Mohammed bin Salman as “strong partners in this fight against terrorism.”