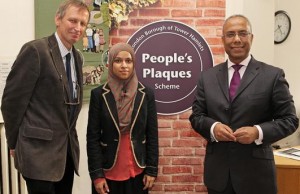 Designed to celebrate the East London borough’s rich heritage, the first phase of the scheme allows local people to nominate a site with an historic importance to be to be marked with a plaque. Nominations can be submitted online or by picking up a copy of the nomination form from any Idea Store or Library across the borough.

Tower Hamlets has a number of blue plaques in the borough through a national scheme which has now closed to new proposals due to government funding cuts. The blue plaques commemorate the link between notable figures of the past and the building in which they lived or worked.

Notable plaques in the borough include the inspirational Sir Thomas Fowell Buxton who lived and worked in the borough and was an active anti-slavery campaigner who represents the history of challenging the status quo and fighting injustice.

Another plaque commemorating Edith Cavell, a pioneer of modern nursing in Belgium and a heroine of the Great War who trained and worked in Tower Hamlets, is displayed by the Royal London Hospital in Whitechapel.

Plaques are not just limited to individuals in the borough but more widely representing locations and events.

During World War Two, Tower Hamlets docks, railways and industries meant that the area was a continual target resulting in horrific levels of infrastructure destruction and deaths. A plaque under the Railway Bridge in Bow acknowledges the first Flying Bomb which fell in the borough.

Mayor of Tower Hamlets, Lutfur Rahman, at the launch said: “Tower Hamlets has always been a unique area. It’s a place with huge developments and a constantly evolving borough. The level of diversity and change mean there is an even greater need here, than possibly anywhere else in the country, to recognise our common history through the contributions made by different people, places and events.

“The nature of the scheme means that every resident’s voice is significant. Anyone can nominate a person, place or event that is specifically important or meaningful to them whilst celebrating our distinctive and fascinating history.”

Mayor Rahman explained to the audience of locals and representatives from historic organisations how the national blue plaque scheme only skims the surface of the large, diverse range of people, places and events that deserve recognition and appreciation in the borough.

Cabinet member for culture, Cllr Rania Khan, said: “History was not just made by famous and powerful people. History is also made by ordinary people. We want to ensure that we honour the diversity of the individuals who made Tower Hamlets’ history. We want to give ownership of the process to the people of this borough and that is why local people will be nominating and voting as part of this scheme.”

The Tower Hamlets People’s Plaque scheme was approved as a result of a £4,000 budget amendment earlier this year to recognise the importance of heritage in the borough.

20 nominations will be shortlisted for a public vote after the closing date on Sunday, November 3.
For more information visit www.towerhamlets.gov.uk/peoplesplaques or email peoples.plaques@towerhamlets.gov.uk