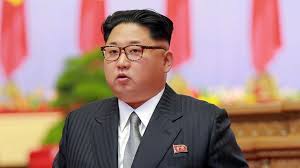 North Korea announced a halt to nuclear weapons development Saturday, a day after a key party meeting and less than a week before the first inter-Korean summit in over a decade.
“From April 21, North Korea will stop nuclear tests and launches of intercontinental ballistic missiles,” read a statement released by Pyongyang’s state-run KCNA news agency.
The North’s leader Kim Jong-un was quoted as saying that his nation would now focus on “building the economy based on socialism”.
But Kim stopped short of denuclearization, insisting instead that his country has already “risen to the status of a political and military powerhouse”.
It remains to be seen what exact conditions will need to be met for the withdrawal of global economic sanctions aimed at ending North Korea’s nuclear threat.
South Korean officials have suggested a peace treaty may be discussed at next Friday’s inter-Korean summit between Kim and President Moon Jae-in, following decades of tensions since a ceasefire ended the 1950-53 Korean War.
The mood between the Koreas will have been boosted by the North’s promise Saturday to “guarantee transparency” in dismantling the nuclear site where it has carried out all six of its nuclear tests since 2006.
It also paves the way for Kim’s planned meeting with U.S. President Donald Trump in the coming weeks.
“This is very good news for North Korea and the World – big progress! Look forward to our Summit,” Trump wrote on Twitter in response to Saturday’s news.