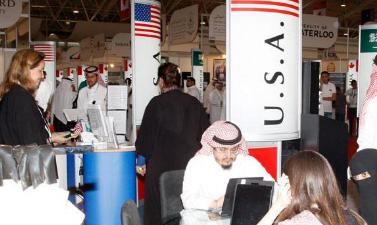 The number of Saudi students in the United States has reached 111,000 this year, up from 10,000 in 2007 while the number of Saudi students studying medicine in the States is over 600.
The Department of Commerce in the US said that international students have contributed to revive the US economy with $22.7 billion in 2011. “The number of Saudi students increased by 50 percent in 2011 alone,” local media said.
Saudi students can go for higher studies abroad through enrolling in the King Abdullah Foreign Scholarship Program that allows access to the best world universities to pursue disciplines which lead to bachelors, masters and doctorate degrees and medical fellowships.
The countries where Saudi students are sent to study are selected on the excellence of their educational programs and are subject to periodic reviews. Currently, students accepted in the program are sent to the USA, Canada, the United Kingdom, Ireland, France, Spain, Italy, Australia, Germany, the Netherlands, Poland, New Zealand, Austria, Hungary, the Czech Republic, Singapore, South Korea, Japan, the People’s Republic of China, Malaysia, India and South Africa, according to the Ministry of Higher Education’s website.