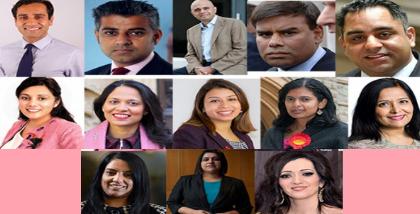 Making a new record in British parliament, A record of 13 Muslim MPs, up from 8 in 2010, have been elected in one of the most unpredictable and extraordinary general elections in Britain. Eight of the Muslim MPs are women.
“It is great news that there are more Muslim MPs elected than ever before. However, the House of Commons still does not reflect the diversity of the population,” said Editor of The Muslim News, Ahmed J Versi. He added that it was a welcome sign that more Muslim women have been elected this year, six Labour, one Conservative and one SNP.
The election included the first Muslim SNP MP, Tasmina Ahmed Sheikh, elected in the landslide by the nationalist party in Scotland as well as the first female Muslim Conservative MP Nusrat Ghani.
While Labour votes fell away, four Muslim candidates won seats for the first time for the opposition party and added to five who were re-elected. Anas Sarwar in Glasgow was the only sitting Muslim MP not re-elected after falling victim of the sweeping SNP victories.
One of the most surprising was mental health campaigner Naz Shah winning Bradford West back for Labour with a majority of 11,420 against Respect party leader George Galloway who had won the seat in a landslide bi-election in 2012.
On party numbers, Labour has nine Muslim MPs, the Tories three and the SNP one. Despite fielding 24 Muslim candidates all in unwinnable seats, the Lib Dems have yet to have a Muslim MP. Of the total of 13 Muslim MPs, eight are women.
List of new Muslim MPs
Tasmina Ahmed Sheikh (SNP, Ochil_and_South_Perthshire)
Rupa Huq (Labour, Ealing Central and Acton)
Tulip Rizwana Siddiq (Labour, Hampstead and Kilburn)
Nusrat Ghani (Conservatives, Wealden)
Naz Shah (Labour, Bradford West)
Imran Hussein (Labour, Bradford East)