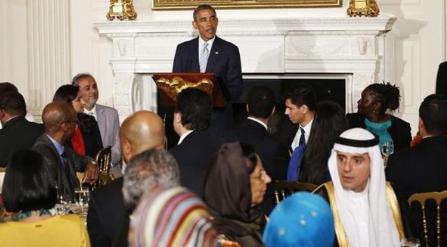 U.S. President Barack Obama hosted Tuesday an Iftar at the White House in celebration of the Holy Month of Ramadan.
During the Iftar gathering, which is the time when Muslims worldwide break their fast after sunset, Obama discussed Middle Eastern matters including the ongoing conflict between Israelis and Palestinians and the turmoil in Iraq.
The Iftar, which has become an annual tradition at the White House, gathered diplomats from the Arab and Muslim world.