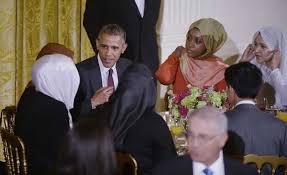 President Barack Obama said Monday that Americans stand united in rejecting the targeting of any religious or ethnic group as he marked Islam’s holy month of Ramadan.
Obama opened the White House to Muslim Americans for a traditional iftar dinner, which follows daily fasting from dawn to sunset. Ramadan ends with the Islamic holiday of Eid al-Fitr.
“We affirm that whatever our faith, we’re all one family,” Obama said at the East Room dinner attended by about 40 members of the diplomatic community and a few members of Congress.
He recognized several young dinner guests, including Samantha Elauf, who went to the Supreme Court to defend her right to wear a headscarf, or hijab. She was 17 in 2008 when she was rejected for a sales job at an Abercrombie Kids store in Tulsa, Oklahoma, after wearing a hijab to the interview.
“She was determined to defend the right to wear a hijab – to have the same opportunities as everybody else,” Obama said. “She went all the way to the Supreme Court – which I didn’t do at her age – and she won.”
Obama spoke of three young Muslims who were killed Feb. 10 in Chapel Hill, North Carolina, and the nine black church members killed last week in Charleston, South Carolina.
“As Americans, we insist that nobody should be targeted because of who they are, what they look like, who they love, how they worship,” he said. “We stand united against these hateful acts.”