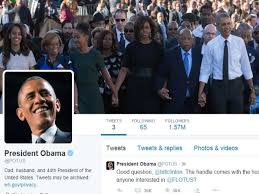 “Dad, husband, and 44th President of the United States.” With this message, US president Barack Obama has joined Twitter with his personal account.
According to the New York Times, his first post from @POTUS twitter handle on Monday included a greeting—“Hello, Twitter! It’s Barack. Really!”
“Six years in, they’re finally giving me my own account,” he posted.
Within no time, more than one million people had signed up to follow Obama’s presence on the micro-blogging site.
According to his aides, the phone belonged to the Executive Office of the President and was not regularly carried by Obama.
It is unlikely that he will post messages from his heavily-secured BlackBerry.
It is unclear what device Obama will finally use to post on his personal account.
According to a White House blog post, the new Twitter account would feature “tweets coming exclusively from” the president.
He was also not following Hillary Rodham Clinton, the Democratic presidential candidate who served as his secretary of state.
Clinton’s account was not following @POTUS either as of now, the NYT report added.
Already, there is one @BarackObama Twitter handle which has nearly 60 million followers.
It is operated by Obama’s former campaign operation and is rarely used by the president.
There is also the @WhiteHouse handle which communicates official missives to its 6.1 million followers.