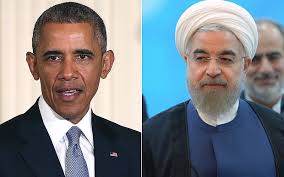 In a televised address, Obama said the deal cut off “every pathway” to an Iranian atomic weapon.

“Today, because America negotiated from a position of strength and principle, we have stopped the spread of nuclear weapons in this region,” he said in an address from the White House.

Describing a “difficult history” between Iran and the United States that “cannot be ignored,” Obama said the diplomatic victory also showed “it is possible to change.”

“This deal offers an opportunity to move in a new direction. We should seize it,” he said.

As Obama concluded his address – which was aired by Iranian state television – Rowhani began his statement on the diplomatic breakthrough.

The agreement would open a new chapter of cooperation with the outside world after years of sanctions, he said adding the “win-win” result would gradually eliminate mutual mistrust.

Iran would abide by its commitments under the agreement as long as world powers did, Rowhani, seen as a reformer, said.

He asserted the accord protected gains made by Tehran in a nuclear program the West suspects is intended to develop an atomic weapon. Iran says the work is purely peaceful.

Rowhani also urged neighboring countries to ignore what he called propaganda by Israel, saying Iran had a shared interest in the stability of the region.