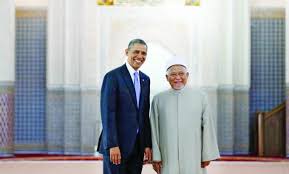 President Obama will make his first visit as president to a US mosque next week in a defense of religious freedom, the White House said, following a rise in anti-Muslim rhetoric in the United States.
Obama will visit on Wednesday the Islamic Society of Baltimore mosque, where he will hold a round-table with the community and deliver remarks, a White House official said on Saturday.
This is part of the the administration’s push to promote religious tolerance at a time when rhetoric linking Islam with terrorism is growing, it said.
At the mosque, the president will “reiterate the importance of staying true to our core values, welcoming our fellow Americans, speaking out against bigotry, rejecting indifference, and protecting our nation’s tradition of religious freedom,” the official said.
He has visited mosques outside the United States on his trips abroad.
Obama, a Democrat in his last year as president, has appealed to Americans to reject anti-Muslim comments by politicians, most notably Republican presidential hopeful Donald Trump.
Trump, who is leading the Republican field in opinion polls, called for a ban on Muslim visitors to the United States after a Muslim couple inspired by militants killed 14 people in a shooting in San Bernardino, California, in early December.
In an e-mail, a White House official said that President Obama is making the visit “to celebrate the contributions Muslim Americans make to our nation and reaffirm the importance of religious freedom to our way of life.”
“The President believes that one of our nation’s greatest strengths is our rich diversity and the very idea that Americans of different faiths and backgrounds can thrive together — that we’re all part of the same American family. As the President has said, Muslim Americans are our friends, and neighbors; our co-workers, and sports heroes — and our men and women in uniform defending our country.”
At the Islamic Society, the president will hold a roundtable discussion with community members, the official said.
According to a Gallup poll in December, Americans are now more likely to name terrorism as the top issue facing the US than any other issue.
The Islamic Society of Baltimore is a sprawling community center in the city’s western suburbs that serves thousands of people with a place of worship, a housing complex and schools, according to its website. It is one of the Mid-Atlantic region’s largest Muslim centers and describes itself as aspiring “to be the anchor of a growing Muslim community with diverse backgrounds, democratically governed, relating to one another with inclusiveness and tolerance, and interacting with neighbors in an Islamic exemplary manner.”
The visit will be part of the tightrope-walking Obama has done during his presidency around Islam.
For years, Muslim Americans have lobbied him to visit a mosque, citing Islamophobia. At the same time, a segment of Obama’s critics have said since he took office that he is a Muslim pretending to be Christian, and that he plays down the religious aspect of Muslim extremism. Recent polls show that 29 percent of Americans and nearly 45 percent of Republicans think he is a Muslim. The visit comes in the last year of his presidency.
The possibility of a mosque visit came up again a month ago, when several prominent Muslim Americans met with senior White House officials to discuss concerns about rising hostility toward people of their faith. During that session — which was attended by White House senior adviser Valerie Jarrett, Domestic Policy Council director Cecilia Muñoz and deputy national security adviser Ben Rhodes — the Islamic leaders asked for Obama to visit a mosque, ideally with former president George W. Bush.
Presidents rarely visit houses of worship, aside from when they have attended church for their own religious practices. Obama regularly attends religious services on key holidays. In May, he visited a synagogue for the first time as president.
In 2001, Bush visited the Islamic Cultural Center of Washington, six days after the 9/11 terrorist attacks, where he declared, “Islam is peace,” and “the face of terror is not the true faith of Islam.”
While Islamophobia has been an issue for some time, particularly as the Islamic State has gained strength in Iraq and Syria, it intensified once Republican lawmakers and presidential candidates began calling for a halt to refugees from the Mideast after terrorist strikes in Paris and San Bernardino, California, late last year.
Sen. Ted Cruz (R-Tex.) and former Florida governor Jeb Bush (R) have suggested screening asylum seekers on the basis of religion and accepting only Christians. And in December, Republican presidential front-runner Donald Trump called for a “total and complete shutdown” of the entry of Muslims to the United States “until our country’s representatives can figure out what is going on.”
More broadly, Cruz and several other Republicans have criticized Obama and Democratic presidential candidate Hillary Clinton for refusing to use the phrase “radical Islam” when discussing terrorist activities.
Obama has increasingly spoken out against the anti-Muslim rhetoric.
“When politicians insult Muslims, whether abroad or our fellow citizens, when a mosque is vandalized, or a kid bullied, that doesn’t make us safer,” he said during his State of the Union address this month. “That’s not telling it like it is. It’s just wrong. It diminishes us in the eyes of the world. It makes it harder to achieve our goals. It betrays who we are as a country.”
Speaking at the Israeli Embassy Wednesday night at the first Righteous Among Nations awards banquet held in the United States, the president said the impulse to stigmatize people of other faiths is “deep within us.”
“Too often, especially in times of change, especially in times of anxiety and uncertainty, we are too willing to give into a base desire to find someone else, someone different, to blame for our struggles,” the president said. “An attack on any faith is an attack on all of our faiths.”