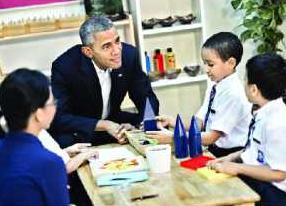 U.S. President Barack Obama said the world must offer haven to refugees, as he visited a Malaysian center for displaced children Saturday amid a bitter and racially tinged U.S. debate over the Syria exodus.
During his stop at the Dignity for Children Foundation in Kuala Lumpur, Obama knelt down to chat to children aged between seven and nine years about their art work and hopes for the future.
Many at the small, well-appointed center, complete with a pet bunny, were members of Myanmar’s persecuted Rohingya Muslim minority, which was at the center of a dramatic refugee crisis earlier this year.
Obama later said the children “are just like our kids and they deserve love and protection and stability and education”.
“They are deserving of the world’s protection and the world’s support,” he said.
Back home, Obama’s administration is coming under fire for advocating the acceptance of Muslim refugees from Syria and Iraq.
The White House has rejected opposition to such refugees as “hysteria” and “un-American”, but has struggled even to keep Democratic allies on board due to fears the fleeing masses could include dangerous militants.
“Are you learning English?” Obama asked one girl after greeting her and shaking her hand.
“You’re working so hard.”
He later said kids like her were “the face of not only refugees from Myanmar — that’s the face of Syrian children and Iraqi children”.
“When I sat there and talked to them, they were drawing and doing their math problems; they were indistinguishable from any child in America.”
The House of Representatives voted Thursday to ban Syrian and Iraqi refugees from entering the United States until tougher screening measures are in place.
Eyeing the 2016 elections, nearly four dozen Democrats have gone against their president to support the measure.
Obama’s White House has threatened to veto the proposal.