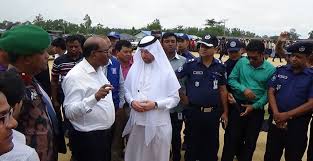 A high-profile delegation of ministers and representatives of the Organisation of Islamic Cooperation (OIC) is visited Rohingya camps in Cox’s Bazar on Friday.
A 53-member delegation of representatives of OIC-member countries arrived at Cox’s Bazar Airport around 8:45 am and went to a hotel in Inani.
Later, they went to visit the Rohingya camps around 11:30 am, said Mohammad Kamal Hossain, deputy commissioner of Cox’s Bazar district.
Youssef, who is leading an OIC delegation here, came up with the remarks after visiting Rohingya camp at Kutupalong.
“We’ve visited Rohingya camps, heard their tales of sufferings and collected information about brutalities inflicted on them by Myanmar army,” he said at a press briefing.
The Rohingya issue will be presented at the OIC Council of Foreign Ministers with a greater focus, he said.
The delegation includes Foreign Ministers, State Ministers from 38 countries.
The delegation team is vising the camps just a day before beginning of the 45th session of the OIC Council of Foreign Ministers (OIC-CFM) in Dhaka.
Prime Minister Sheikh Hasina is scheduled to open the two-day event at Bangabandhu International Conference Centre (BICC) on Saturday morning.