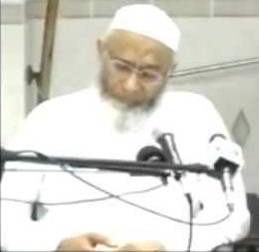 Yahya Birt: Maulana Yusuf Motala (may God have mercy on his soul) (1946–2019) passed away last night in Toronto. He was one of the giants of Islam in Britain, and like the Tablighi Jamaat leader Hafiz Mohammed Patel (1926–2016), he had a huge influence upon the development of Muslim communities in Britain in the latter half of the twentieth century and after. His contribution has not always been understood by other British Muslims who did not move within these circles, and certainly not by wider society, an exception being the Church of England’s hierarchy (in a rare public appearance, Sheikh Yusuf attended the founding of the Muslim-Christian Forum in 2006). Only in 2019 was his importance acknowledged in this year’s list of the most influential Muslims in the world, The Muslim 500.

As well as being a spiritual guide to thousands, Sheikh Motala was best known as the founder of the Dar al-Ulum al-Arabiyya al-Islamiyya in Holcombe near Bury in Lancashire in 1973. It was the first higher educational institution set up in this country that taught the traditional Islamic seminary syllabus developed in Mughal India (the dars-i-nizami) as refracted through the Deobandi revivalist movement of the nineteenth century. Popularly known as “Dar al-Ulum Bury” or simply “Bury” (not to be confused with the Lancashire mill town), this institution has produced hundreds of graduates who have gone on to serve communities here, in Europe, North America and further afield. “Bury” has been the mother madrasa for many of the Deobandi seminaries in the West; just within the UK, several seminaries were established by Sheikh Yusuf’s own students.

Born in Surat District in Gujarat, the westernmost state in India, in 1946, Sheikh Yusuf’s family hailed from a farming background and were very committed to religious education. Completing his memorisation of the entire Qur’an at a young age, he enrolled in the famous Mazahir al-Ulum Saharanpur in Uttar Pradesh in North India in 1961 where he studied extensively under its leading figure, the noted hadith scholar, spiritual guide and author of the huge influential Tablighi Jamaat syllabus, Sheikh al-Hadith Maulana Muhammad Zakariyya (1898–1982). Sheikh Yusuf was especially close to his mentor, who advised him to set up the seminary in 1973 and at an advanced age made two trips first in 1979 and then in 1981 to “Bury”, the second time to oversee the graduation of its first cohort.

I only had the good fortune to meet Sheikh Yusuf once at a gathering in Kidderminster two decades ago, and so can claim no personal knowledge of him, but in lieu of a proper obituary and of course full appreciation of his life, works, influence and legacy, this brief note will have to do in its stead. I felt connected to him because of the inspiration I found in the syllabus books written by his mentor that motivated me greatly during my first three years as a Muslim when I was involved in Tablighi Jamaat. It has also my good fortunate to know and work with a number of the graduates of “Bury” over the years. If one can judge a tree by its fruit, then I can say that these “fruits” exhibited humility, sound Islamic knowledge, refined good character, a sense of sacrifice and commitment to the deen and service to the Muslim community. They are his legacy and they have shaped the everyday lives of Muslim communities up and down this country.

May Allah fill his grave with light and raise him to the highest ranks in Paradise alongside the prophets, the veracious, the martyrs and the righteous. Amin.

-Yahya Birt, is a PhD candidate in Theology and Religious Studies at the University of Leeds. He is researching the history of postwar Muslim political activism in Britain.