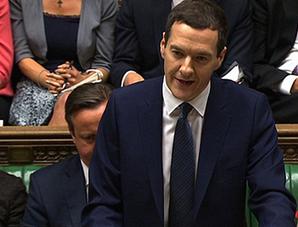 Britain’s Finance Minister George Osborne has launched a new front in his austerity push as he challenged some government departments to find spending cuts of up to 40 percent by the end of the decade.
The chancellor said he would announce on Nov. 25 how he would find an extra 20 billion pounds ($31 billion) of annual departmental savings, on top of deep cuts to welfare spending that he unveiled earlier this month in a post-election budget.
“This spending review is the next step in our plan to eliminate the deficit, run a surplus and ensure Britain lives within its means,” Osborne said in a statement.
Osborne is asking departments how they could cut between 25 percent and 40 percent of their annual day-to-day spending, in order to give the government a range of options of how to make the 20 billion pounds of savings it is targeting.
Healthcare, schools, defense and overseas aid spending are largely excluded from the cuts.
Earlier on Tuesday data showed the government was making progress in cutting Britain’s budget deficit which narrowed by 20 percent in the second quarter compared with a year earlier.
The improvement was helped by increases in revenues from income tax and corporation tax, which are now growing as the economy recovers after lagging the broader recovery last year.
However the shortfall in June was higher than economists had expected as spending rose, and they said the data underscored Osborne’s challenge of tackling what remains one of the biggest deficits among the world’s advanced economies.
Liz Martins, an economist with HSBC, said an expected rise in Britain’s zero inflation rate in the coming months would add to government spending on inflation-linked bonds.
“It may be that the government has to work a bit harder from here to get the kind of deficit narrowing it is looking for,” she wrote in a note to clients.
Osborne has been trying to fix Britain’s public finances since 2010, when his Conservative Party formed a coalition government with the centrist Liberal Democrats.
The Conservatives won an unexpected parliamentary majority in elections in May, empowering Osborne to press on with his drive to reduce the size of the British state while also requiring companies to pay workers a higher minimum wage.
He said on Tuesday that government departments should look at selling public land under their control as part of the push for savings that match the level of austerity Osborne sought five years ago when he began his spending squeeze.
Britain’s independent Institute for Fiscal Studies has said delivering cuts of the same scale of the past government is likely to prove harder as many of the easy-to-make savings have already been made.