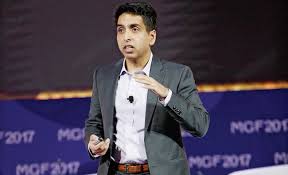 With online learning revolutionizing access to education, prominent American educator and Khan Academy founder Sal Khan reaffirmed on Wednesday that his mission is to reach everyone with his idea of e-learning.
Speaking at a keynote session titled “Education Re-imagined” on the opening day of the Misk Global Forum 2017 in Riyadh, Khan, who runs his academy as a free online education platform, explained how he runs the academy, which according to him has 60 million registered learners in more than 100 countries.
While sharing his experience, Khan said he began with tutorials for his cousin through online videos but growing demand from relatives and friends prompted him to come up with a YouTube channel to distribute lessons.
His organization has produced more than 6,500 video lessons teaching a wide spectrum of subjects especially mathematics, science and computing.
Speaking in front of a huge gathering of Saudi youths as an icon with an inspiring story, Khan said, in a few years he had millions of viewers that inspired him to concentrate on developing the Khan Academy as a non-profit organization.
During his presentation, he iterated that online learning complements rather than competes with traditional education, adding that this online access to education helps individuals learn diversified skills.
During his talk, he shared a video of Bill Gates, how he was impressed with Khan Academy’s idea of online learning and later turned to be a big supporter of his charitable work, which he is doing for free and for everyone.
The Bill and Melinda Gates Foundation and Google helped Khan Academy flourish, he said, adding that they also get generous donations from others, which help run the program.
He also shared videos of students who benefited from the academy with their reactions on how the academy is helping students in learning lessons.
Khan is a Massachusetts Institute of Technology (MIT) graduate with a management degree from Harvard Business School.