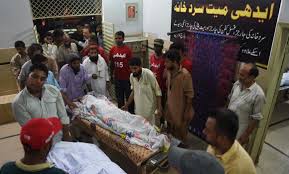 Pakistani officials say more than 100 people have died from heatstroke in the southern port city of Karachi in the last two days.
Seemi Jamali, a spokeswoman for city’s Jinnah Hospital, confirmed the deaths on Monday. She said hundreds more have been admitted to the hospital with heat-related ailments, including fever and dehydration.
Karachi is in the grip of a rare heat wave, with temperatures soaring to 45 degrees Celsius (113 degrees Fahrenheit). A collapse of the local power grid over the weekend made matters worse.
Meteorologist Mohammad Hanif says the heat wave is the worst in at least a decade, but that the arrival of monsoon rains in the coming days should bring relief.