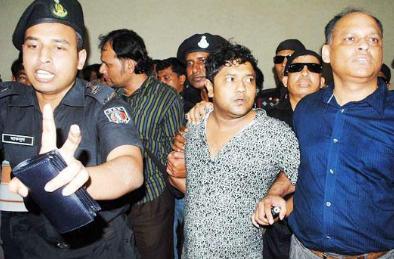 Bangladesh police said Tuesday they will press murder charges against the owner of a nine-story building that collapsed and killed 1,135 garment workers last April, the worst industrial disaster in the country’s history.
Sohel Rana, owner of the Rana Plaza factory complex on the outskirts of the capital Dhaka, was one of around 40 people who would be charged in connection with the disaster, said lead investigator Bijoy Krishna Kar.
“We are planning to press murder charges against Sohel Rana and some other accused,” Kar of the police’s Criminal Investigation Department told AFP, adding that if convicted Rana could be sentenced to death.
It was the first time police have said they would file murder charges against Rana, who was arrested on the western border with India as he tried to flee the country days after the April 24 disaster.
Rana, a junior official in the ruling Awami League party, became the country’s public enemy number one after survivors recounted how thousands of them were forced to enter the compound at the start of the working day despite complaints about cracks appearing in the walls.
Among the others expected to be charged are Rana’s father, who is a co-owner of the building, and five bosses of the garment factories operating within the complex who also allegedly ignored the cracks.
The five include David Mayor, a Spanish citizen who was out of the country at the time of the collapse, said Habibur Rahman, another CID investigator.
Most of the accused are out on bail while Mayor never returned to the country to avoid arrest.
A host of Western retailers had clothing made at Rana Plaza, including Italy’s Benetton, Spain’s Mango and the British low-cost chain Primark.
“Our investigation is almost over. We wanted to wrap up our work before the first anniversary of the tragedy on April 24 but even writing up the case notes has proved to be a huge task,” Rahman told AFP.
“We hope we can press the charges by next month.”
The collapse was the worst industrial disaster in Bangladesh’s history.