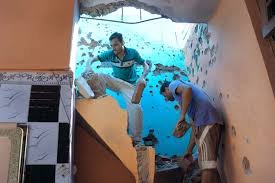 Indian firing across a disputed border with Pakistan has killed 12 civilians and injured 52 in Pakistan so far this month, according to a Sunday press release from the Foreign Ministry.
Sartaj Aziz, the adviser to Prime Minister Nawaz Sharif on national security and foreign affairs, said that officials from UNMOGIP, a UN observation team, were going to the disputed border to observe the cease-fire violations.
He also appealed to UN Secretary General Ban Ki-moon on Saturday for assistance in solving the long-running dispute with India over the status of Kashmir, according to the Sunday press release.
Pakistan revived its demand for Kashmiris to be allowed to hold a plebiscite to decide the region’s future, as called for by a UN resolution adopted in 1948. India has long opposed a plebiscite.
“For decades, Pakistan has been reminding the UN and the international community to fulfill that promise, in the interest of durable peace and security in the region,” Aziz said in his letter to Ban Ki-moon.
Former president and military ruler Pervez Musharraf had said in 2003 that he was prepared to set aside that demand in an effort to reach a settlement over Kashmir.
The disputed border running through Kashmir is heavily militarized on both sides.
Since the beginning of October, Pakistan and India have been firing mortars and machine-guns across the border, leading to the highest death toll in a decade among civilians on both sides.
It is unclear what started the intense firing, although officers who have served on the disputed Line of Control say that small incidents can rapidly escalate as each side responds with ever-increasing force.