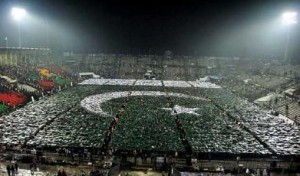 More than 29,000 schoolchildren defied all odds on Saturday to set a new world record for Pakistan, of making a human national flag, under hailstorm and rain at the National Hockey Stadium, eclipsing the existing record set by 27,117 Bangladeshis last year.
The record was made at the second attempt. Soon after completing the flag at the first attempt, the children hurled their green and white cards in celebration, believing that they had achieved the target.
But since officials of the Guinness Book of World Record had yet to count the number of children, another attempt had to be made.
Inclement weather worried the Punjab sports minister and other organisers as no arrangement had been made to hold the event under rain and hailstorm. Although Lahore has been experiencing cloudy and rainy weather since Friday, the Punjab Sports Board had taken no step to deal with the vagaries of the weather.
Speaking on the occasion, MNA Hamza Shahbaz Sharif said the Punjab government would set a sports endowment fund with an initial
amount of Rs2 billion. The government has been talking about the fund for the last one year.
Some schoolchildren were reportedly injured while pushing each other.
The children had been brought from Lahore and adjoining cities to the stadium in the morning in hundred of hired buses.
The programme was to start at 1pm but due to a delay caused by the weather, it started at around 4.30pm and continued till 7.30pm. A box of ‘biryani’ was given to each child at lunch and later in the evening and they were seen struggling to get their share.
A child told Dawn that they had to report at their school at 8am and now it was 8pm. It was not easy for them to spend 12 hours while braving harsh weather in the open.
He said the system of distributing the food was flawed and they faced difficulties in getting “biryani” boxes.
“Now we are looking for our buses to return home. God knows when we will be at our home,” a student from Sheikhupura said.
Other children also made similar complaints and said that it was mandatory for them to participate in such events because they were students of a government school.
Some private schools and universities were also asked to send their students but they refused to do so.
In last year’s Youth Festival organised by the Punjab Sports Board, 24,000 students had set a world record by making a human national flag. But the record was broken by Bangladesh. -Source: dawn