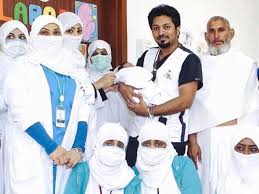 A Pakistani pilgrim gave birth to a baby boy in Mina on Tuesday, the first day of the annual pilgrimage of Hajj.
Dr. Muhammad Malaibari, director of Mina Al-Wadi Hospital, said that the delivery was normal and the mother and infant are in good health. This is the first birth at the holy sites after pilgrims moved to the tent city.
The baby was named Muhammad Ali. The nursing director at the hospital said that the mother is a diabetic and hence she has been given special medical care.
Meanwhile, father of the baby said that his wife experienced labor pain when they arrived in Mina, and immediately moved to reach Mina Al-Wadi where she delivered the baby.