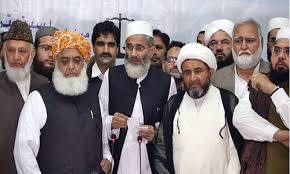 Aamir Shah: Pakistan’s five major religio-political parties have joined hands to form an electoral alliance under the banner of Muttahida Majlis-i-Amal (MMA) for the upcoming general elections.
“We will take part in the general elections with one election symbol and one manifesto,” Liaqat Baloch, secretary-general of Jamaat-e-Islami, told Arab News.
He said that all parties had agreed to the alliance and the names of its office-bearers and members of the working committee would be announced within a month.
He said that registration of two of the member parties of the alliance — Jamiat Ulema-e-Pakistan and Markazi Jamiat Ahl-e-Hadith — was in progress with the Election Commission of Pakistan (ECP) and would hopefully be completed next week.
“We will formally apply to the Election Commission for registration of the alliance and the election symbol within weeks,” he said, adding that they were also consulting their legal team to fulfill all other legal requirements for registration of the alliance.
“We will contest the election from all over Pakistan and we are also open to seat adjustments with other political parties as well.”
Baloch said that it was a difficult task to bring all religio-political parties which follow different schools of thoughts to one table but that the leadership of all the parties had decided to work together for the betterment of the country and people.
“Our electoral alliance will give people an opportunity to elect honest and noble candidates for Parliament,” he said. “Nobody will be able to raise a finger concerning the character and honesty of our candidates.”
The MMA — United Council of Action — was first formed in 2002 to contest the general election in opposition to the policies of the then military dictator, Gen. Pervez Musharraf, who had announced support for the US in the war against terrorism in Afghanistan at the time.
The alliance emerged victorious in Khyber Pakhtunkhwa (KPK) and Balochistan provinces in the wake of the elections and formed its governments in those provinces.
The parties, however, contested the 2008 and 2013 general elections independently from their own platforms.
Now the five parties that have agreed on the alliance include Jamaat-e-Islami, Jamiat Ulema-e-Islam-Fazal (JUI-F), Islami Tehreek, Jamiat Ulema-e-Pakistan and Markazi Jamiat Ahl-e-Hadith.
JUI-F member Maulana Mohammed Khan Sherani told Arab News that they were trying to provide an alternative platform for the people to elect their representatives in the general election.
“Our sole aim is to serve the people and rid the society of social evils like usury,” he said, claiming that the majority of Pakistanis support the electoral alliance of the religious parties and would vote for it.
“We will contest elections from all four provinces but our major focus will be Khyber Pakhtunkhwa and Balochistan,” he said, adding the alliance would contest the election under its previous election symbol.
Rasul Bukhsh Rais, a political analyst, believes the electoral alliance of the religious parties is only to counter the popularity of Pakistan Tehreek-e-Insaf (PTI) in Khyber Pakhtunkhwa province.
“The alliance will try to capture the religious vote bank in KPK, but it is premature to predict its success,” he said. “The victory of MMA in 2002 was due to the political environment at that time as people wanted to vent their anger against Gen. Musharraf by voting for it.”