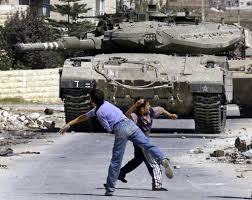 Israel’s parliament imposed tougher penalties of up to 20 years prison for people throwing stones at vehicles and roads, a move one Palestinian official branded racist and excessive.
Lawmakers voted 69 to 17 to increase the punishments late on Monday, approving legislation proposed after a wave of Palestinian protests last year in East Jerusalem.
“Tolerance toward terrorists ends today. A stone-thrower is a terrorist and only a fitting punishment can serve as a deterrent and just punishment,” Israel’s Justice Minister Ayelet Shaked, of the far-right Jewish Home party, said in a statement.
Confrontations between Palestinian youths and Israeli police routinely degenerate into violent clashes, and stone throwing has been a symbol of Palestinian resistance since the first Palestinian uprising, or Intifada, against Israel in the late 1980s and early 1990s.
Human rights groups have criticized Israel for using excessive force including live fire in suppressing Palestinian demonstrations, causing dozens of deaths and hundreds of injuries.
The new law allows for a sentence of up to 20 years in jail for throwing a rock at a vehicle with the intent of causing bodily harm and 10 years in prison if intent was not proven.
Prosecutors in such cases have usually sought sentences of no more than three months in jail when the offence does not result in serious injury.
Qadura Fares, head of the Palestinian Prisoner Club, an organization that advocates on behalf of Palestinian prisoners in Israeli jails, said the new law was “racist”.
“This law is racist, hateful and contradicts the most basic rule that the punishment fit the offence” he said.
The law would cover territory including East Jerusalem, but not the occupied West Bank, most of which is under the jurisdiction of the Israeli military.
Israel hands down about 1,000 indictments a year for rock-throwing, according to the Israeli Knesset.