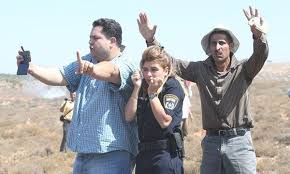 An Israeli police officer found unlikely protection in the form of two Palestinian men, who, despite their differences, sheltered her from rocks, according to a picture taken in the midst of a stone-throwing battle between Jewish extremists and Palestinians, according to a report in RT.
The picture appeared on social media on Sunday and was taken by photographer Shaul Golan for Israel’s Yedioth Ahronoth newspaper. The West Bank outpost, Esh Kodesh, became the scene of clashes between dozens of settlers and Palestinian farmers, working on their land Saturday.
According to the report, Igal Sarna, who published the photo on Facebook, wrote that it shows what he has seen “for many years in the occupied territories – the transformation of consciousness.”
One of the men sheltering the Israeli officer was Zakaria Sadah, a Palestinian field worker for Rabbis for Human Rights (RHR), an Israeli human rights organization.
“While it is natural that the security forces may identify more with their own people, procedures regarding law enforcement in situations involving violent Israelis must be clearly laid out and consistently implemented,” RHR said in a statement, regarding the Saturday incident.