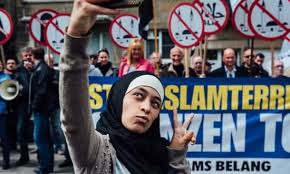 When party poopers turn up and try to turn a celebration sour there are a number of ways to react.
One might slink off into the shadows, or one might decide to quite literally grin and bear it – as this young woman did.
Zakia Belkhiri, 22, was at Antwerp’s third annual Muslim Expo during the weekend when around 40 members of Vlaams Belang, a far-right Belgian political party, gatecrashed the event.
They brought with them an array of signs bearing anti-Muslim slogans such as ‘no headscarves’, ‘no mosques’ and ‘stop Islam’.
In the face of such hostility, Zakia Belkhiri grabbed her cell phone and posed for a selfie in front of the protesters, while making a peace sign with her fingers.
Ms Belkhiri told BBC Trending that she took the photos “to show that things can be different. And that we can live together, not next to each other but with each other.” She initially shied away from media attention because she “didn’t want to look like a girl who seeks attention.”
She also added that she doesn’t think a selfie can be a form of protest; “this wasn’t a protest at all, this was just to share joy and peace.”