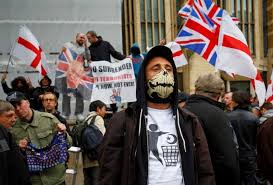 The far-right movement Patriotic Europeans Against the Islamization of the West, also known as PEGIDA, held its first march in London, U.K. in front of the Prime Minister’s residence on Saturday.
The protest, which enjoyed little participation, was organized by the U.K. branch of the German far-right movement established in 2014. PEGIDA U.K. selected for Saturday’s gathering London’s famous Downing Street, home for the de facto residence of the Prime Minister and close to Houses of Parliament and Buckingham Palace.
The U.K. branch of PEGIDA has earlier announced the march via its official Facebook account saying, “Are you patriotic? Are you loyal to your country? Have you spare time? Do you live in London? Where are you going to be at 5pm? Watching TV or at PEGIDA UK patriotic rally? What is your excuse? Your country needs you there in London.”
Approximately 100 protesters gathered and held U.K. and England’s national flags.
Separately, anti-racism organizations called London Anti-Fascists, or AFN, and Unite Against Fascism, or UAF, staged an anti-racism and anti-PEGIDA march an hour before the PEGIDA march.
The AFN released a statement via its official website, saying, “London Anti-Fascists oppose all forms of reactionary movements – from the streets to the state. We see PEGIDA UK as one manifestation of the unease in society caused by state divide and rule tactics, the stirring up racial and religious hatred in the media and the decline in living standards.”