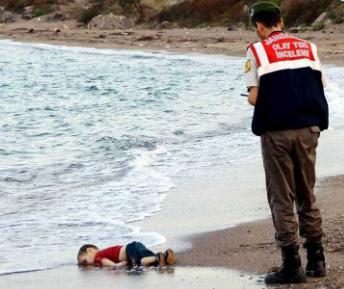 A photo of a toddler’s lifeless body washed ashore on a Turkish beach after a migrant boat sank has sparked an international outcry on social media on Wednesday, in a poignant image of the refugee crisis gripping headlines across the globe.
The boy was among at least 12 other Syrians died attempting to journey by sea on an overcrowded dinghy to the Greek island of Kos. Among the dead were five children and a woman.
Another 15 people were rescued and the coastguard, backed by helicopters, was continuing its search for three more who were still missing, a statement said.
Turkish media identified the boy as 3-year-old Aylan Kurdi, whose 5-year-old brother also died on the same boat. Media reports said he was from the north Syrian town of Kobane near the Turkish border, scene of heavy fighting between ISIS militants and Kurdish regional forces a few months ago.
The images showed little Kurdi lying face down in the sand near Bodrum, one of Turkey’s prime tourist resorts, before he was picked up by a police officer in photographs taken by the Dogan news agency.
‘Humanity washed ashore’
The hashtag “#KiyiyaVuranInsanlik” (“Humanity washed ashore”) made it to Twitter’s top world trending topics after the image was widely shared.
The image made the front page of almost all of Britain’s major newspapers, including some that had previously taken a hard line on the migrant crisis.
“If these extraordinarily powerful images of a dead Syrian child washed up on a beach don’t change Europe’s attitude to refugees, what will?” asked The Independent in an editorial which was headlined: “Somebody’s child.”
London has come in for criticism over the number of refugees it has accepted which is lower than other EU countries in proportion to its population.
Over the last week, there has been a dramatic spike in the numbers of migrants – mainly from Syria, Afghanistan, Pakistan and Africa – seeking to leave Turkey by sea for Greece in the hope of finding new lives in the European Union.
The United Nations refugee agency UNHCR says more than 2,500 people have died trying to cross the Mediterranean so far this year.
Warning: This article contains images that readers may find disturbing