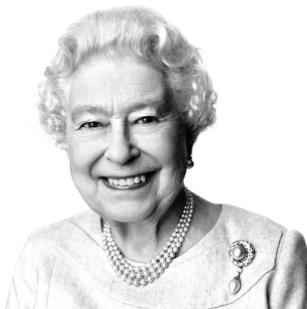 A portrait of a smiling Queen by the renowned British photographer David Bailey has been released today to mark her 88th birthday tomorrow.
The photo of the monarch was taken at Buckingham Palace in March and commissioned on behalf of the government’s GREAT Britain campaign.
The image will be used in activity to support the campaign, which aims to generate jobs and growth through highlighting Britain as a world-class destination for trade, tourism, investment and education.
In the picture, the Queen is wearing pearls and a dress by Angela Kelly, who has served as personal assistant and senior dresser to her since 2002.
Bailey said: “I’ve always been a huge fan of the Queen. She has very kind eyes with a mischievous glint. I’ve always liked strong women and she is a very strong woman.”
Bailey, 76, has photographed an extraordinary range of subjects over more than half a century – actors, writers, musicians, film makers, designers, models, artists and people encountered on his travels.