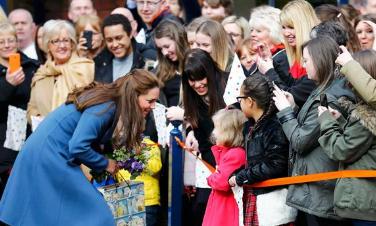 Playing princess by dressing up as the Duchess of Cambridge during her school play, five-year-old Scarlett Gillis enjoyed a royal surprise by receiving a letter from the future queen herself.
The young schoolgirl was chosen to re-enact royal occasions as Kate alongside her leading man, Joshua Rogers, also five, who played Prince William.
Scarlett, a pupil at St. Bede’s College Prep School in Whalley Range, Machester, loved playing the Duchess so much she decided to pen a letter to the royal.
She told Kate about starring in the school’s ‘A Tale of Two Birthdays’ play and how she loved dressing just like her.
Kate, who is currently pregnant with her second child, was also treated to a photo of the young princess, so she could see exactly what Scarlett looked like.
Polite Scarlett, who addressed the letter to “Your Royal Highness” was even thinking about the future of the monarchy writing: “I can’t wait for you to be queen. I think you are lovely, yours sincerely, Scarlett xxxx.”
Scarlett never expected a reply from the Duchess, so her family were astounded when a letter — sealed with a red royal crest — dropped through their letterbox.
The royal surprise read:“It was most kind of you to enclose the photographs of yourself wearing your wonderful red dress for her to see.
“She was interested to learn that you played the part of her in your school play.
“The Duchess of Cambridge hopes that you had a most enjoyable time.”
The youngster said: “I was amazed, I didn’t really think she would have time to reply to all those letters, but I was really happy and glad when I saw the letter and photograph of her she’d attached.
“I thought she was beautiful.