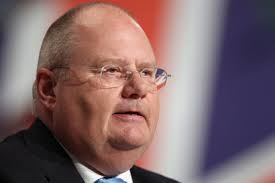 The Muslim Council of Britain (MCB) has compared the government to the far-right with its wording of an open letter to mosques, which claimed they had to work harder to stop radicalisation and ensure young people were not susceptible to recruitment by al-Qaeda and ISIS.
Eric Pickles’ letter, which was sent to 1,000 Muslim leaders after the attack on Charlie Hebdo, has received widespread criticism within the Muslim community.
Harun Khan, deputy secretary general of the council, said: “Is Mr Pickles seriously suggesting, as do members of the far right, that Muslims and Islam are inherently apart from British society?”
He said he was writing back to Pickles to demand an explanation for the assumptions that appeared to be in the letter.
Anti-Islamophobia group Tell Mama has recorded a spike in anti-Muslim incidents since the Paris attack, including death threats, hate mail and drawings of the Prophet Muhamed being sent to London mosques.
The letter read:
Assalamu Alaikum
We have recently seen terrible atrocities committed in Paris. Finding the right response to these events is a challenge for everyone. The hijacking of a great faith to justify such heinous crimes sickens us all. As Muslims around the world have made clear, such actions are an affront to Islam.
And yet, amid the carnage, came a sign of hope – over three million people of all backgrounds marching to defeat the gunmen and to protect our values: free speech, the rule of law, and democracy.
We are proud of the reaction of British communities to this attack. Muslims from across the country have spoken out to say: not in our name
But there is more work to do. We must show our young people, who may be targeted, that extremists have nothing to offer them. We must show them that there are other ways to express disagreement: that their right to do so is dependent on the very freedoms that extremists seek to destroy.
We must show them the multitude of statements of condemnation from British Muslims; show them these men of hate have no place in our mosques or any place of worship, and that they do not speak for Muslims in Britain or anywhere in the world.
Let us assure you that the Government will do all we can to defeat the voices of division, but ultimately the challenges of integration and radicalisation cannot be solved from Whitehall alone. Strong community-based leadership at a local level is needed.
You, as faith leaders, are in a unique position in our society. You have a precious opportunity, and an important responsibility: in explaining and demonstrating how faith in Islam can be part of British identity. We believe together we have an opportunity to demonstrate the true nature of British Islam today.
There is a need to lay out more clearly than ever before what being a British Muslim means today: proud of your faith and proud of your country.
We know that acts of extremism are not representative of Islam; but we need to show what is.
British values are Muslim values. Like all faiths, Islam and its message of peace and unity makes our country a better and stronger place, and Britain would be diminished without its strong Muslim communities.
Every day, mosques and other faith institutions across the country are providing help for those in need, and acting as a centre for our communities. It is these positive contributions that are the true messages of faith and it is these contributions that need to be promoted.
We would also like to reassure you that in recent days we have met with police chiefs to make sure they are providing the support that mosques need, a concern that some of you have expressed in our recent discussions.
We have also met with the Anti-Muslim Hatred Working Group to hear their concerns about responses to the recent attacks and what more can be done.
Anyone experiencing violence should report it to the police online on the True Vision website or to TELL MAMA, a service to provide support specifically to Muslim victims of hatred.
The vitriol espoused by the thugs of the English Defence League and Britain First is just as much an affront to British values as the teachings of preachers of hate.
For organisations experiencing problems with such preachers, information about free legal advice is available from LawWorks at www.lawworks.org.uk/community-groups or the Bar Pro Bono Unit at www.barprobono.org.uk, and the Charity Commission has published a toolkit for charity leaders to help protect their organisations from abuse by extremists. This toolkit is available at http://bit.ly/1xTTH2W.
We welcome your thoughts, ideas and initiatives on how to ensure that Islam’s true message of peace triumphs over those who seek to divide our communities.
Thank you for all the positive work you are doing, and we look forward to working with you further. We continue to appreciate all your insights. Please feel free to contact our team at integration@communities.gsi.gov.uk. We look forward to hearing from you.
The Rt Hon Eric Pickles MP
Secretary of State
Lord Tariq Ahmad of Wimbledon
Parliamentary Under Secretary of State Department for Communities and Local Government