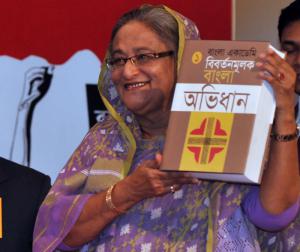 Prime Minister Sheikh Hasina inaugurated the month-long “Amar Ekushey Grantha Mela 2014” at traditional Bangla Academy grounds at 4:27pm Saturday. The fair will open at 3pm and close at 9pm. On Fridays the fair will open at 11am.
According to the organisers, 534 stalls have been allocated to 232 publishing houses at the Suhrawardy Udyan.
The Bangla Academy Literary Award 2013 will be awarded to 11 personalities at the inaugural session.
Later in the fair “Chhittaranjan Saha Smrity Purashkar” and “Munier Chowdhury Smrity Purashkar” will be awarded to the best publishers for their quality publications last year.
The book fair was held for the first time in 1972 in an informal manner at the Bangla Academy premises. In 1984, the fair was named as the Amar Ekushey Grantha Mela.