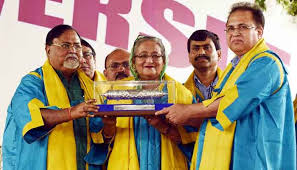 Prime Minister Sheikh Hasina has been awared a doctorate in literature from West Bengal’s Kazi Nazrul University during a special convocation on Saturday.
She was awarded with the honorary D Lit degree at the event in Asansol on Saturday.
Vice Chancellor Sadhan Chakraborty said the degree was awarded to Hasina for her role in creating a democratic society free of exploitation and discrimination, for empowering women, alleviating poverty and promoting socio-economic development.
The event was part of West Bengal’s celebration of poet Kazi Nazrul Islam’s 119th birthday on Saturday. Bangladesh celebrated the birth of its national poet on Friday.
“I am honored to receive this award on such a significant say because I have been able to visit the great poet’s place of birth on his birthday and have received an honorary ‘Doctor of Literature’ degree from the university named after him,” she said.
“I believe this honour is not for me alone, but for all the people of Bangladesh.”
She dedicated the degree to ‘all Bangalees’.
“Nazrul was more than a poet. He was an essayist, a songwriter, a singer, a lyricist, a musician, a playwright, a journalist, an editor and a soldier. He was a man of many talents,” she added.
She also highlighted his contributions to the literature of both Muslim and Hindu Bangalees.
“Bengal may be divided,” she said. “But Nazrul and Rabindranath cannot be. They both belong to both Bengals.”